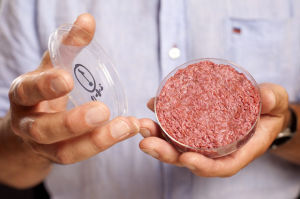 Professor Mark Post of Maastricht University holds the burger made from Cultured Beef in London, Britain, on Monday, August 5, 2013. The Cultured Beef has been developed by Professor Mark Post of Maastricht University in the Netherlands. Post explains that ‘the muscle stem cells, taken by harmless biopsy from living cows, are fed and nurtured so they multiply to create muscle tissue. The cells grow into strands, and 20,000 of them get combined to create one burger’. The total cost of the project has been estimated at 250,000 GBP so far. (photo/Courtesy cdigest)


An innovation in the form of a hamburger grown from stem cells opens the door to new possibilities in food production.

On Aug. 5, a press conference in London revealed the world’s first hamburger created from stem cells. The cells were taken from the muscle tissue of a cow.

The project took more than two months to grow and cost over $300,000, the funding being provided by Google co-founder Sergey Brin. The purpose of the project, according to an article by BBC News, is to create an alternative form of food production to help deal with the ever growing population of the world.

But University of Georgia researchers say it may not be practical to bring such a development to campus.

There have been criticisms cited with the development of the burger, specifically the cost and time it takes to create a single patty of meat.

Franklin West, an assistant professor at the Regenerative Bioscience Center at UGA, said the concept of a stem cell created burger was interesting, but impractical.

“The amount of resources and cost are not economically possible,” West said. “Just the food for the cell alone would cost thousands.”

On the subject of whether the stem cell burger could ever appear on a restaurant or dining hall’s menu, the topic still requires more time before coming to a conclusion for most.

Bryan Varin, associate director of meal plan operations in UGA Food Services, said the most important part of anything that appears on UGA is whether it meets nutritional standards. Varin said all of the food that food services uses come from reputable sources and must undergo a thorough process of identification.

When asked if UGA would ever consider adding a stem cell created burger to the dining hall menu, Varin said there is not enough information on the new product to make that sort of decision.

“It all seems like new technology and something we’d want to learn more about. But we wouldn’t want to test it.” Varin said. “Ten to 20 years from now, maybe, but, as it stands right now, we’re proud of what we have.”

“It depends on the nutritional quality of the project,” Fry said. “We like to be cutting edge, but maybe not that cutting edge.”